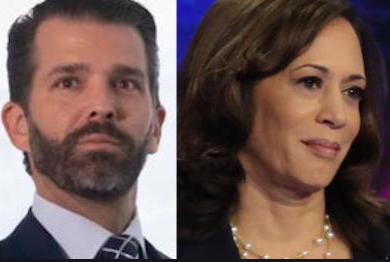 President Donald Trump’s eldest son was up to his usual antics on Twitter so he shared a video compilation of Democratic presidential candidate Senator Kamala Harris in a bid to mock her but Harris’ response to Donald Trump Jr. was brutally perfect See the conversation below….Why is @KamalaHarris the only person that laughs at her jokes… always way to long and way too hard? The most disingenuous person in politics… after Hillary. pic.twitter.com/elskW29XeP— Donald Trump Jr. (@DonaldJTrumpJr) October 12, 2019You wouldn’t know a joke if one raised you. https://t.co/zUV3MLkmVm— Kamala Harris (@KamalaHarris) October 12, 2019The post Senator Kamala Harris claps back at Donald Trump Jr. on Twitter appeared first on Linda Ikeji Blog.
All copyrights for this article are reserved to catchup