At least 10 people have been reportedly killed with 70 others injured after Turkish forces continued its operation in Syria in the late hours of today October 13.

Dead victims of the convoy which was shelled in the northern Syria border town of Ras al-Ain  includes five civilians and a journalist.  Two French reporters were also injured as confirmed by France 2 television journalist Stéphanie Perez who was travelling with the convoy.

“Syria. We were in the convoy of Kurdish civilians targeted by Turkish forces or their allies in Ras Al Ain.

“Our team is fine but some colleagues are dead.” 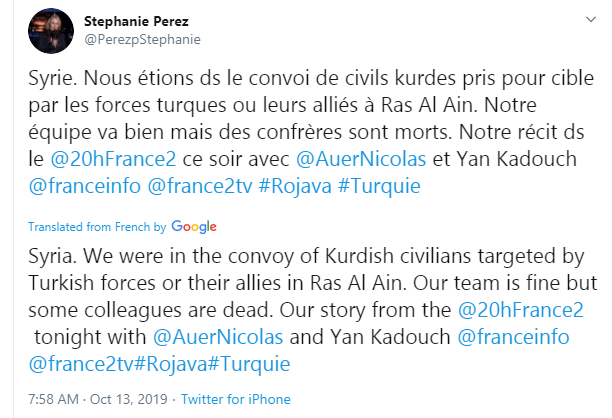 The Kurdish Red Crescent (KRC) also wrote: “11 civilians, including a journalist, lost their lives and 74, including several journalists, were injured.”

Commenting on the attack, Observatory Director Rami Abdulrahman said the civilians came to Ras al Ain from the city of Qamishli to show support as the town is targeted by Turkish forces attacking Kurdish-led forces in northern Syria. Injured victims of the incident were taken to medical facilities in Qamishli, Hassakeh, and Tal Tamir.

Also confirming the attack, Hawar News Agency said one of their correspondents was killed and another injured.

They wrote: “This afternoon, the convoy of civilians, which headed from Qamishlo and Tal Tamer to the city of Serekaniye [Ras al-Ain], was bombed by Turkish occupation aircraft.

In total, at least 104 Kurdish fighters and about 60 civilians have been killed since Turkey launched its offensive on Kurdish forces in northern Syria on Wednesday October 9.