The management of Taraba State University has expelled a 100-level student of the institution identified as Joseph Israel, for reportedly criticizing the state’s Governor Darius Ishaku via his Facebook posts.

Joseph was forced to appear before a malpractice committee which deals with issues of indiscipline and academic wrongdoings, for allegedly being a known online critic of the state’s Governor. 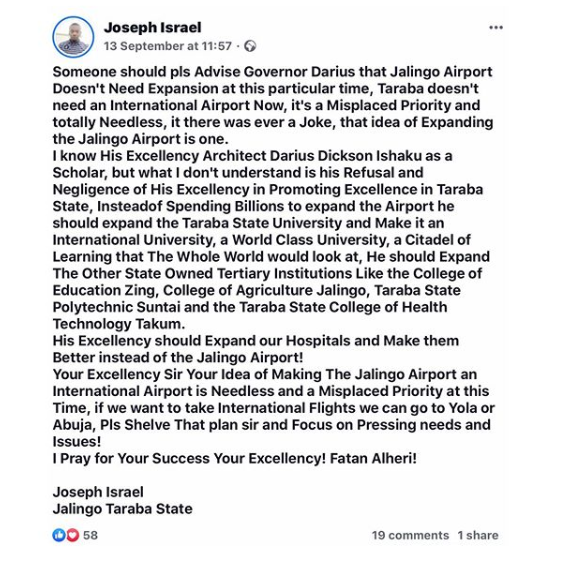 Premium Times reported that Joseph Israel who was admitted to study Chemistry but later switched to Laboratory Science in the state-owned school, had his admission withdrawn in September by the management of the insitution who claimed he didn’t “complete the registration processes” which include signing the matriculation oath form.

“Further take notice that the withdrawal of the said admission is hinged on your inability to complete the registration processes of Taraba State University, Jalingo, as approved by the relevant university regulation and which makes (you) a ghost student” his expulsion letter read in part.

However denying the claim made, Joseph said he made a mistake of not taking a photo of the matriculation form he signed.

“The mistake I did was not snapping a picture on the day. I am not a picture person. But I have over 20 persons who can testify that I was there with them on that day. I also signed the form given to us,” he said.

He further revealed that when the committee confronted him over his criticism of the governor, he asked if there was any law in the university stopping students from using social media and expressing their views on governance in the state. The committee didn’t have a ready response at that time and asked him to go until the investigation was concluded. He however handed an expulsion letter instead.

If I were an African president, my first act would be to ban importation of Human hair and bleaching creams – Reno Omokri